Strolling down Walnut Street can be a great casual day date idea, and this Shadyside engagement session should inspire you to do just that. Lovebirds Layne and Matt explored the Pittsburgh neighborhood where they first met for their pre-wedding photo shoot with Lauren Renee Photography. They skipped down the sidewalk, kissed in front of storefronts, and generally had a merry good time basking in their lovers’ glow. After having some fun in this part of the city, they headed to Mellon Park where things got kicked up just a touch. A wardrobe change into an eyelet lace dress for her and some dapper duds for him followed by an appearance by the couple’s Golden Retriever puppy, Barkley, and the session was complete. Overall, these engagements are laid back but timeless, romantic but flirty..the best of both worlds, in our opinion. Check ’em out! 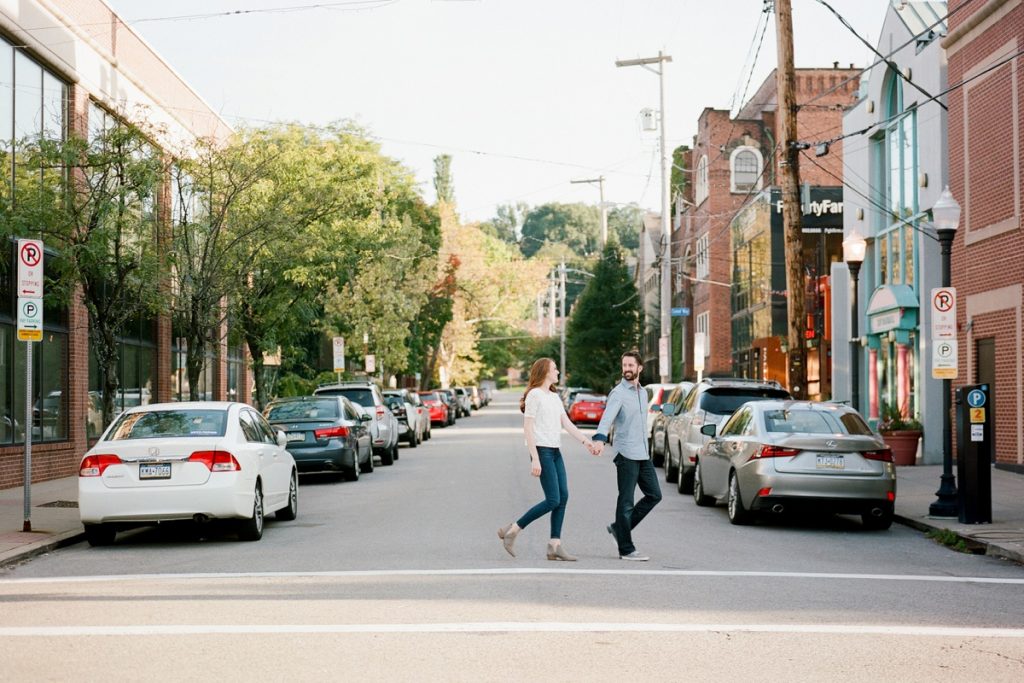 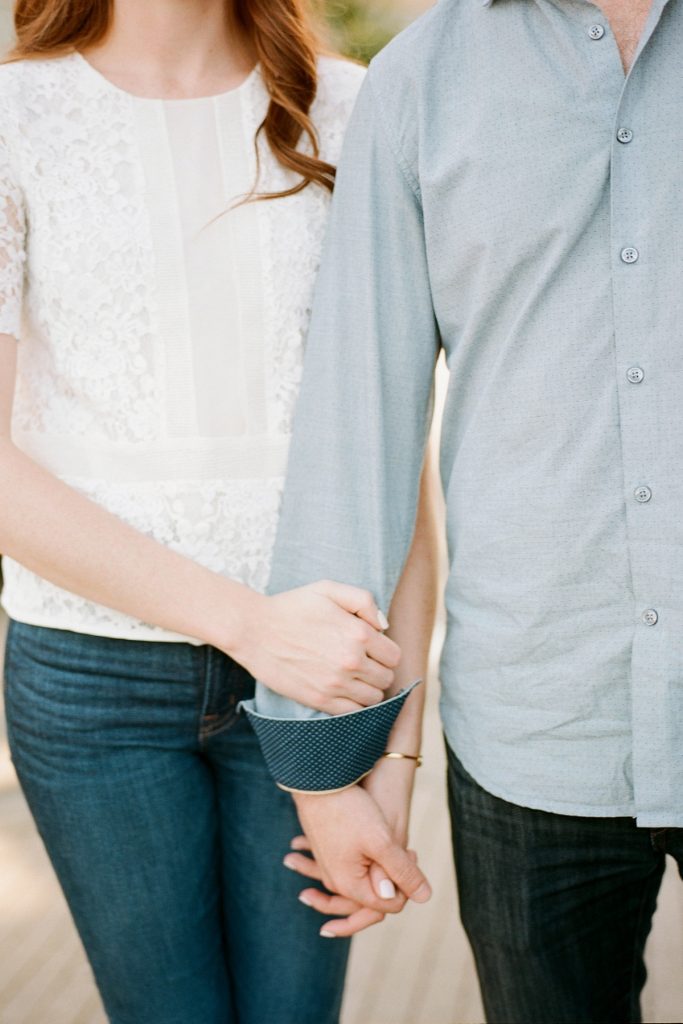 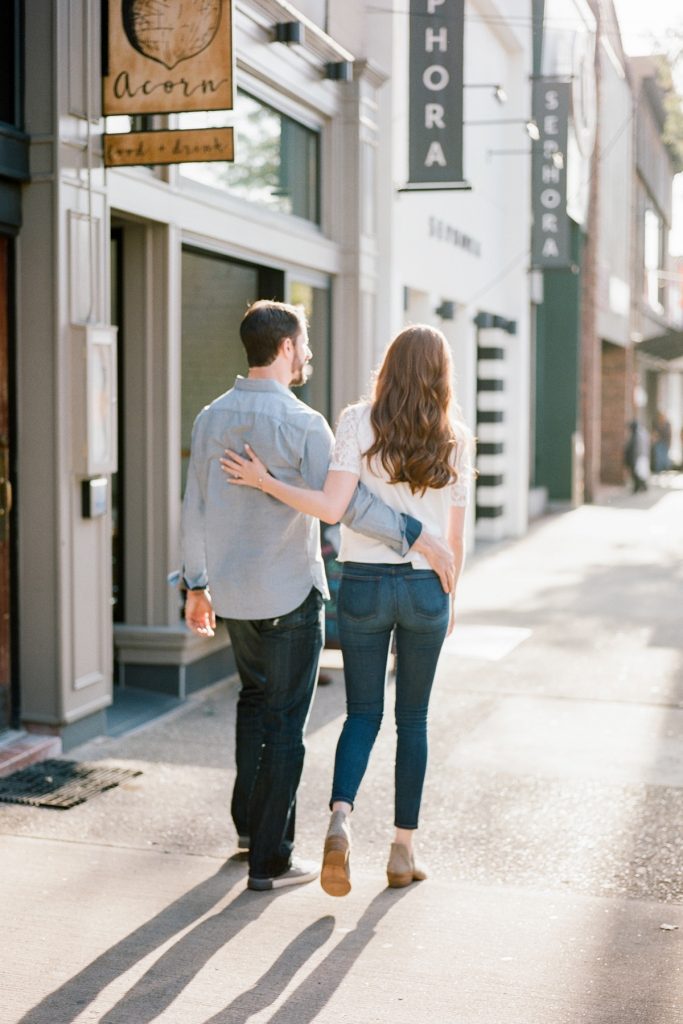 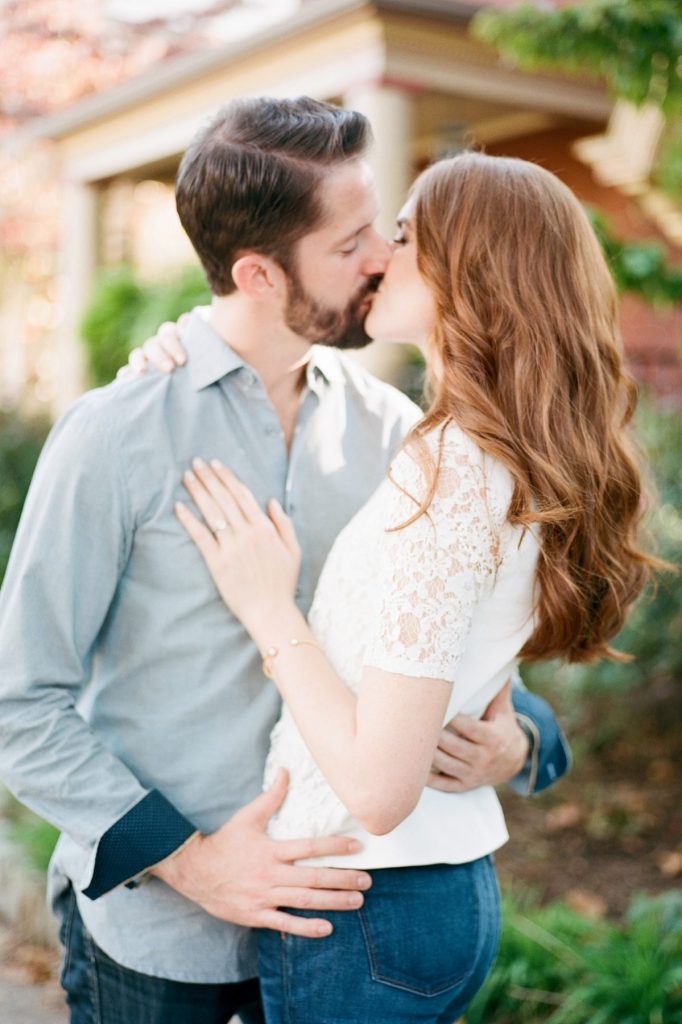 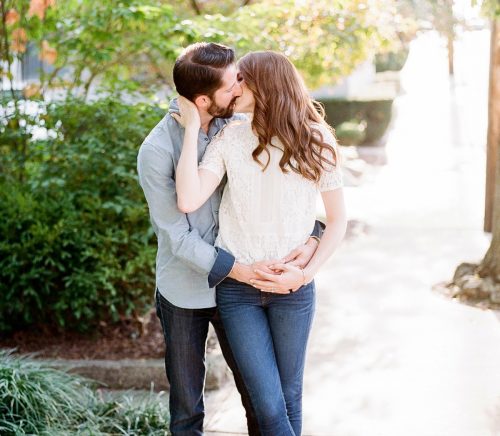 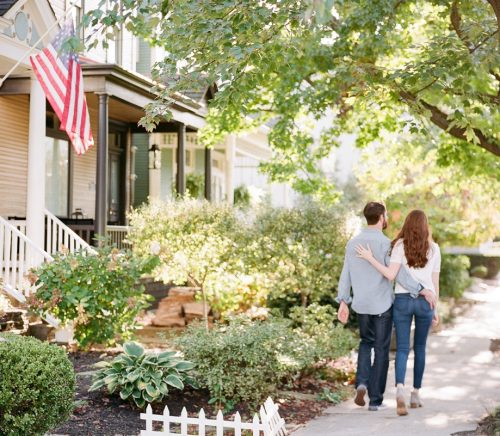 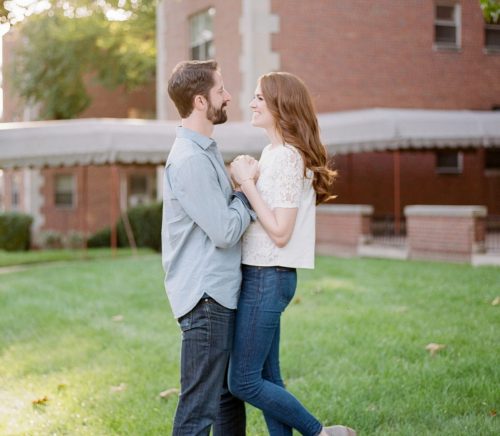 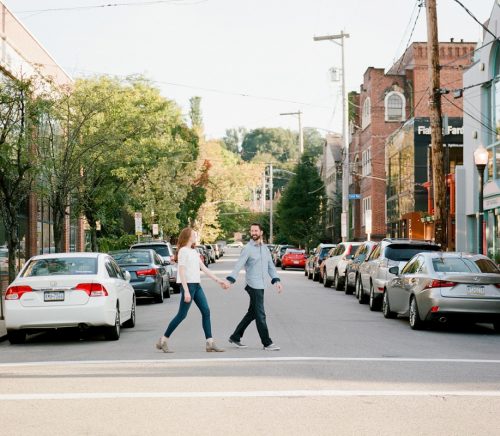 Matt and Layne met in July of 2016 at Jam on Walnut, an outdoor street festival. Layne was spending time with her friend, Mary, and some residency friends. Matt was with his friends, Matt and Scott. Luckily, Mary started questioning the boys regarding their relationship and employment status. Coincidentally, Mary and Scott had mutual friends, which kept the groups chatting. As Layne tried to save the boys from Mary, she met Matt. Quickly, Layne and Matt started talking. They went on their first date the following Friday.

After a fun-filled year and a half of dating, Matt pulled off a December to remember in 2017. Matt started to plan the engagement in the fall of 2017. Layne loves golden retrievers and had been wanting a puppy for as long as she can remember (or at least as long as she and Matt had been together). Layne sent several hints of puppy pictures to Matt daily. Matt had come up with the clever plan for getting Layne a puppy for the engagement. The pup was ready slightly before the ring, but Matt knew Layne would hate to miss a second of the puppy. So he planned the first surprise. As Layne was busy working, Matt sneakily picked up the golden retriever. His sweet sister, Erin, and family graciously hid the puppy for the night. The next day when Layne thought Matt was bringing her Big Dog coffee, he also brought the best Big Dog ever, Barkley Mullen. Needless to say, Layne was shocked and had no idea there were more surprises to come.

Next with the help of Bark, Matt planned the engagement. Layne and Matt had planned to be home for holiday celebrations immediately after Christmas. The night prior to traveling, Matt made a wonderful dinner with wine from a Sonoma winery where they had traveled. After exchanging presents, there was one more! Matt then proposed! So much excitement in one month! They called their families and got to celebrate with Layne’s family the next evening. 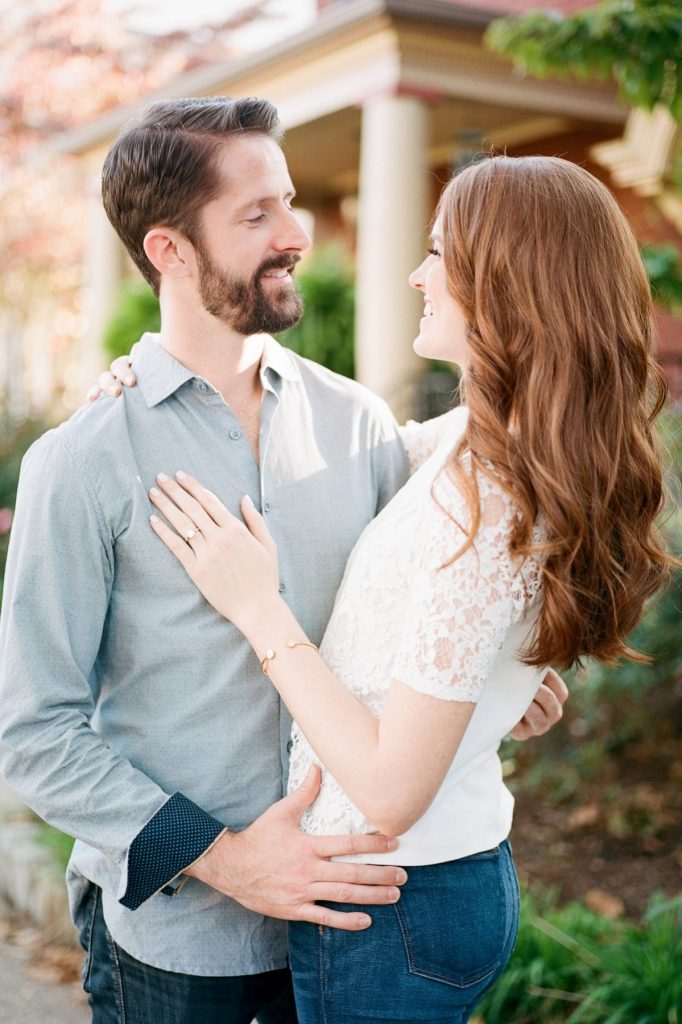 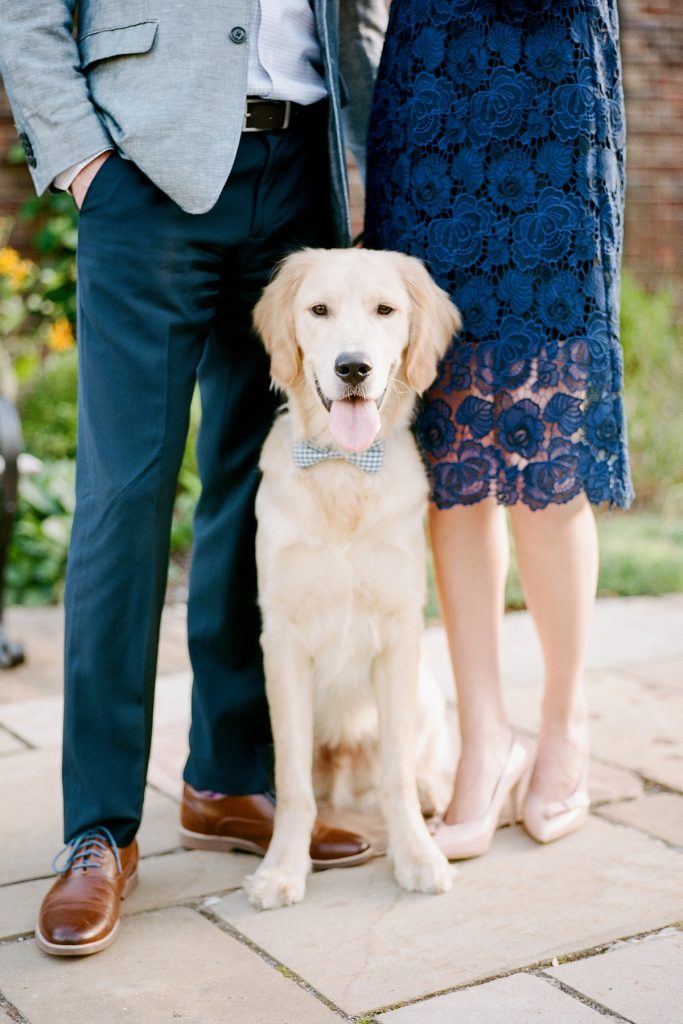 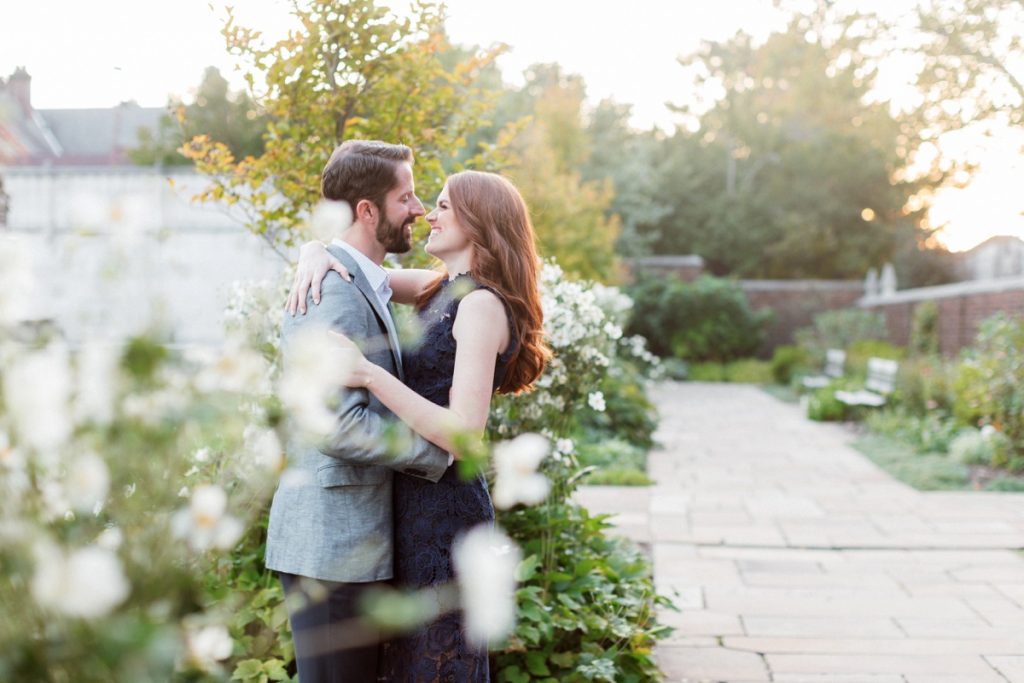 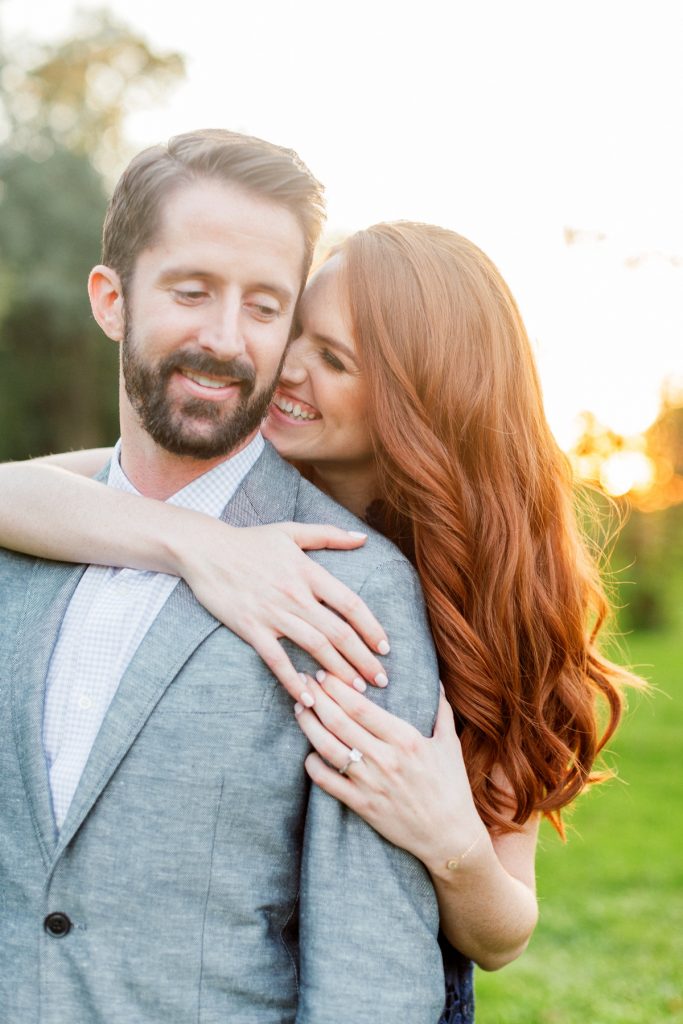 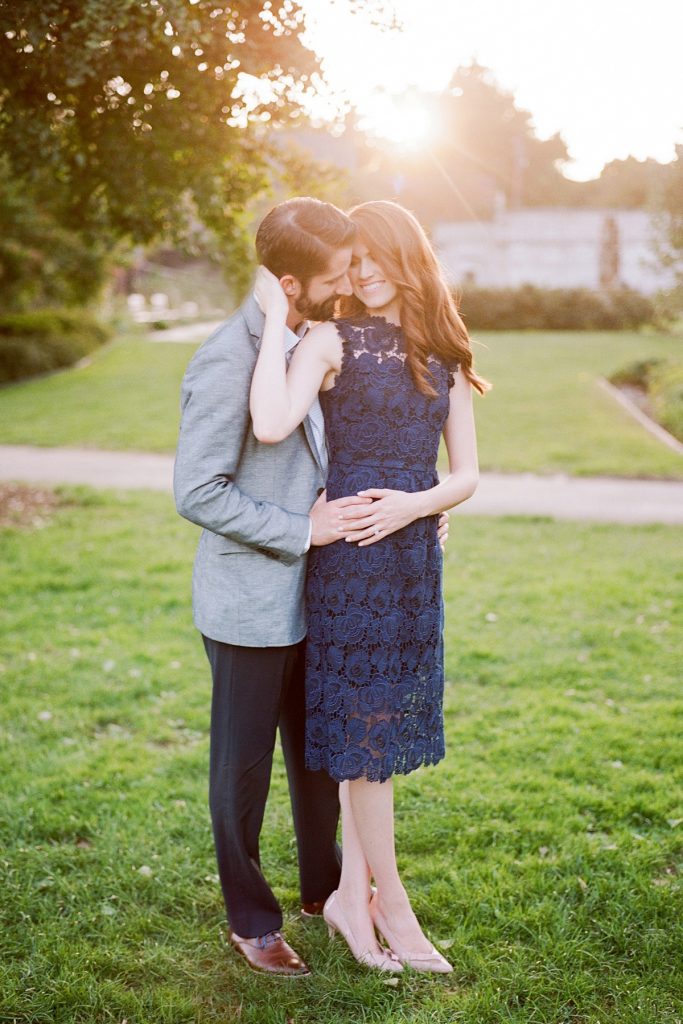 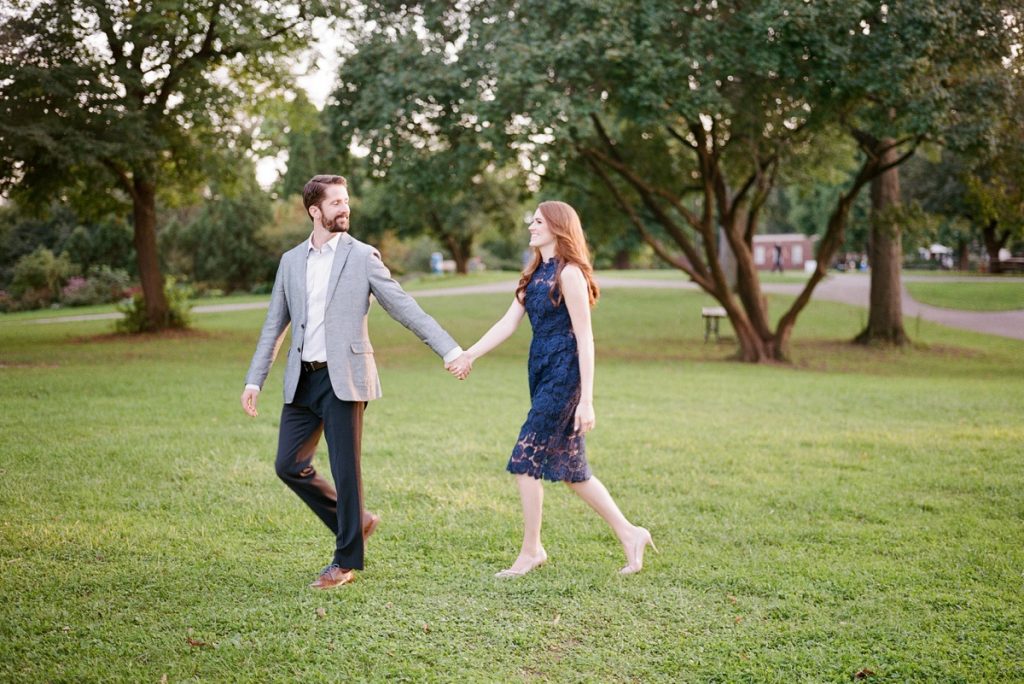 It was a fun and relaxed engagement shoot. Layne loved the idea of taking some pictures on Walnut Street, where they met! The lighting at the park was perfect too! 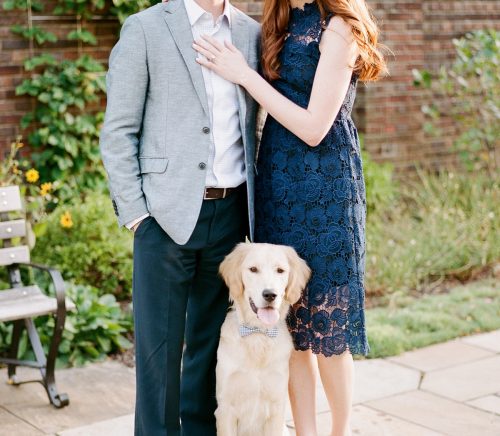 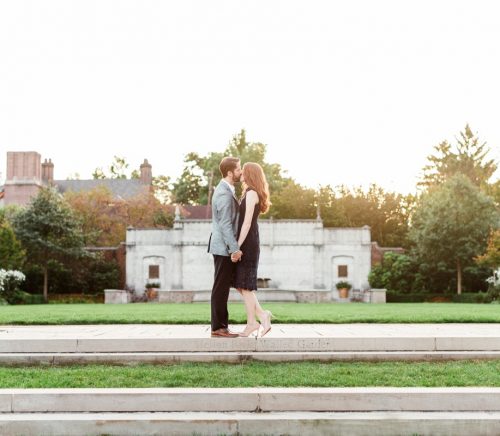 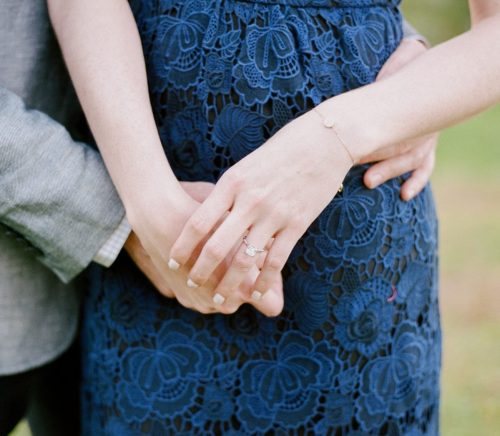 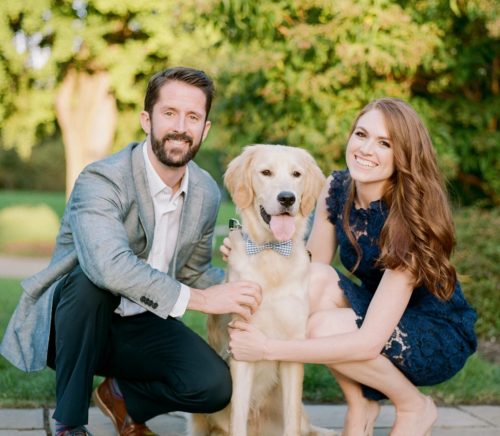 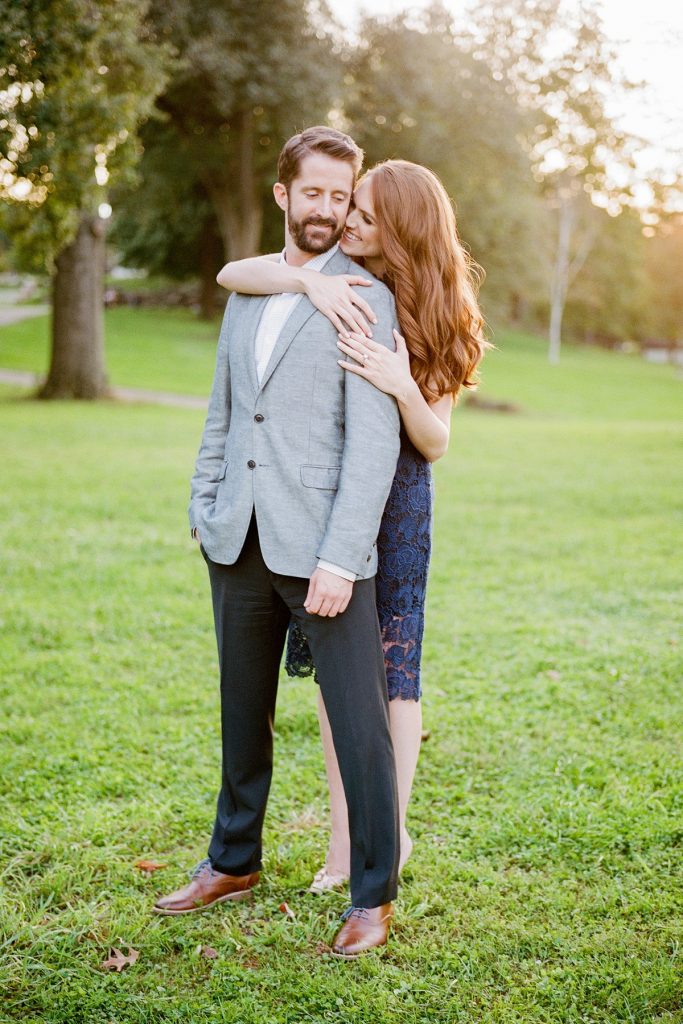 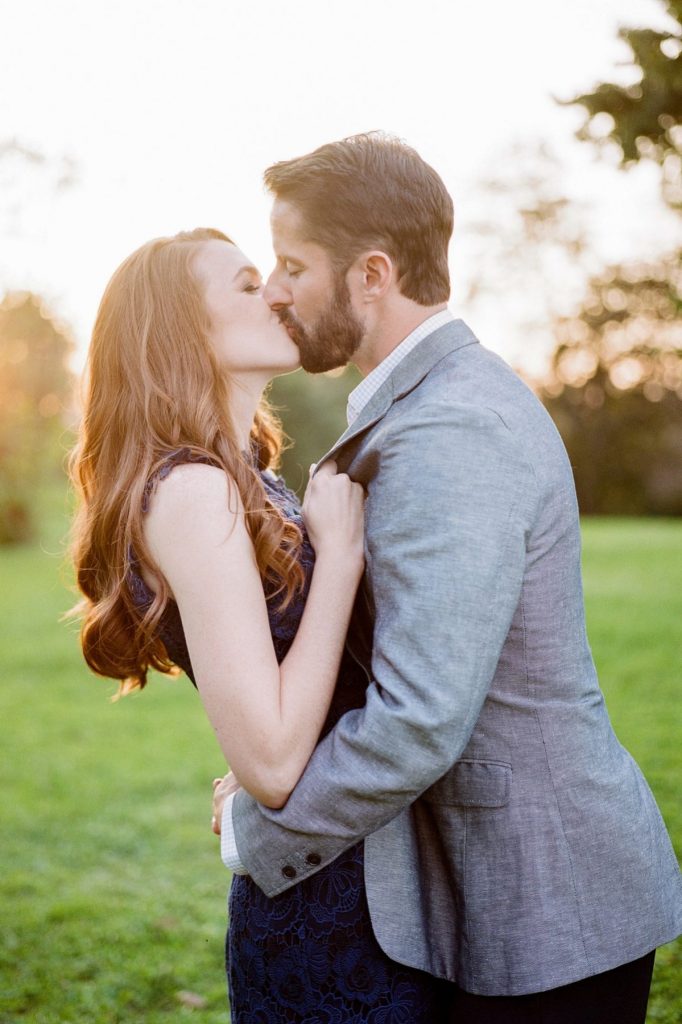 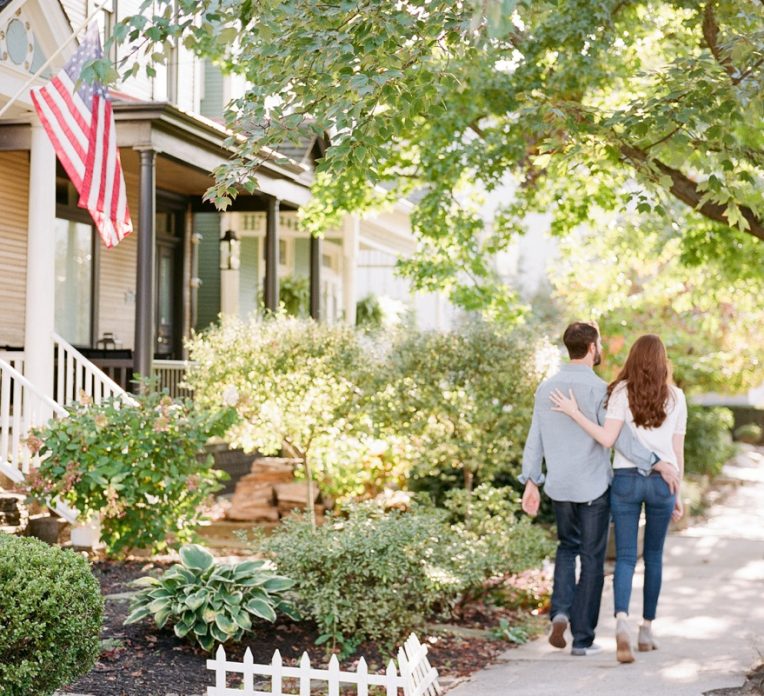 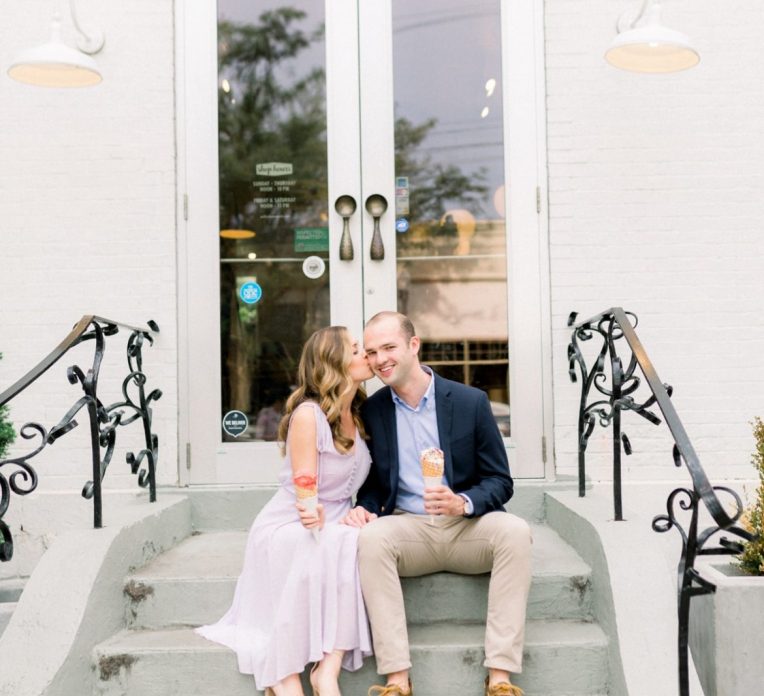 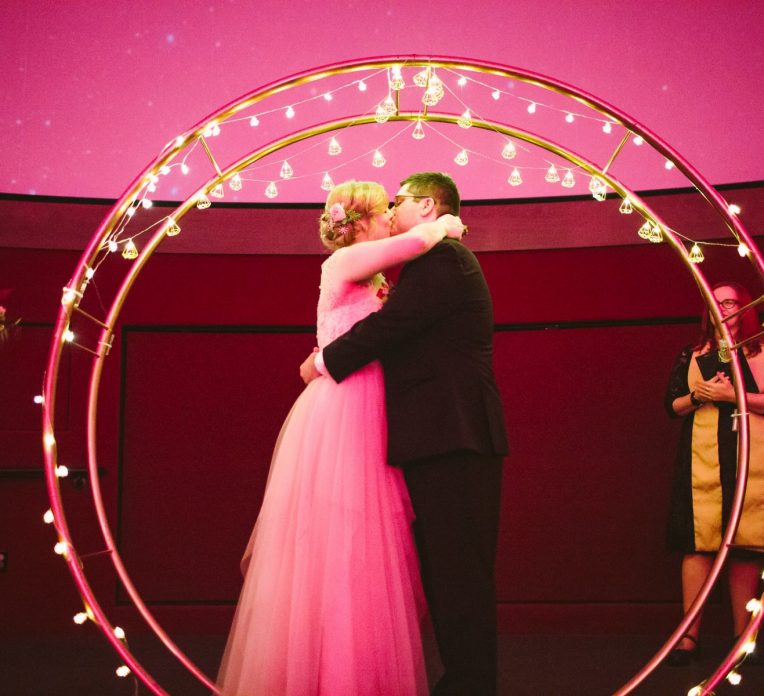